5:30 . The alarm rings . I opened one eye to turn off. I will arise later.
6:00 . Second ring , this time I get up . 4 hours drive up Barcelonnette . I have an appointment with Christian at the parking of Lake allos for 17h. It gives me time on hand to enjoy the scenery and drop my stuff at the apartment of Sauze . I decided to prepare my bag before leaving camp . I just make a few adjustments because I had largely prepared the day before. I make two trips to get my business because I am a night bivouac but two Barcelonnette . A stop at the bakery and I hit the road .

As usual I avoid highways. I lost some time because there was work , deviations and people on the roads of the villages. I also stopped a few times at the height of Serre Poncon and Lauzet . It's really hot , I 'm tank despite 13 degrees . The sun shines and illuminates the colors of autumn vegetation . I can not stop m as I would like to take pictures , but the images are in my head. I finally arrive . 12h . I put the business in the apartment, a small shower , a sandwich in the stomach and I take the road . It is 13:30. I just got my new car the day before and so I did not have time to install my old job Alpine usb . The day before I am prepared to listen to old cd . I roll open window, the left arm on the outside . Like in the movies where the plan shows the hand of the actress making ripple movements in the air 🙂 It feels free in this way. I take the road to the Col d'Allos . The sun is shining , burning through the car window . So I put my old cd Sophie B. Hawkins, Heather Nova and found me the projected year colleges ... nostalgia .. 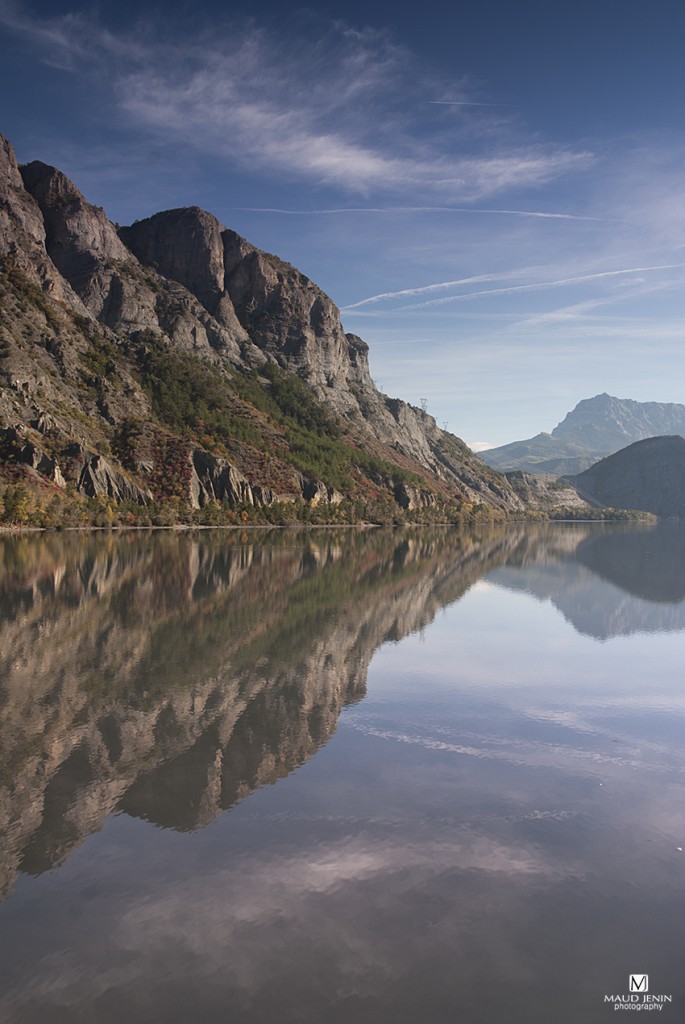 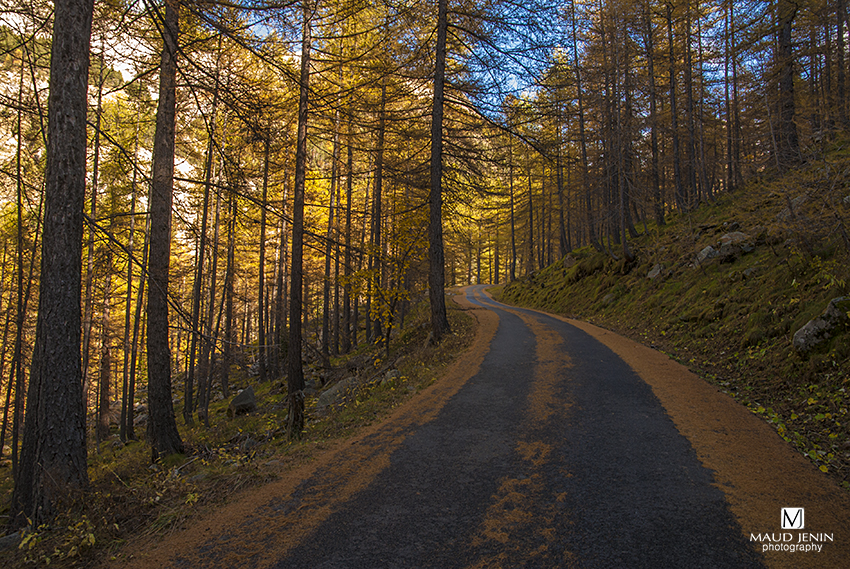 The narrow mountain road , the edge of precipices , winds up to pass Allos . Life is orange. The Larches have flown their aa fall . I spent the neck down to the resort of Val d'Allos and the village of Allos . Finally I see the sign for Lake Allos . Yippee . This time the road winds through the forest of larch . Open window, it smells the scent of the forest , the smell of summer camps as I can ..
at 15:15 Farting ! Will take the time to take some pictures around until Christian . The light quickly hides behind the mountains and the temperature drops. The parking lot is full when I arrived empty . The last walkers go around 17h .

Allos Lake is a perched lake at 2220 m altitude in the Mercantour National Park , in the Alpes-de-Haute -Provence. It is the largest natural mountain lake in Europe.

Christian arrives. It is knowledge . He prepares his bag. It is en route to the lake. It is not long . 40 minutes. We arrived when the sun caresses the tops . I release my shoulders my big bag and start walking around the lake in search of perspective for photos. The sky is cloudless . Water is a true mirror. No tub. The orange color of the light is to copy the larches . It's good . Silence reigns . I'm fine. Christian went to the other side of the lake. I stay around the refuge.
Haka team facebook group I take the pose proudly. I do not have my filter holder so I 'm two shots every time .

I let Christian shooter while I head to the southeast side of the lake looking for a location for our bivouac.
Christian home. We put our bags . All of a sudden Christian is attracted by the beautiful colors pink behind. I said " progress" .. Muni tripod he runs to the eastern shore of the lake to seize this moment . Upon reflection I do the same 🙂 It was not great but at least it's in the box ! 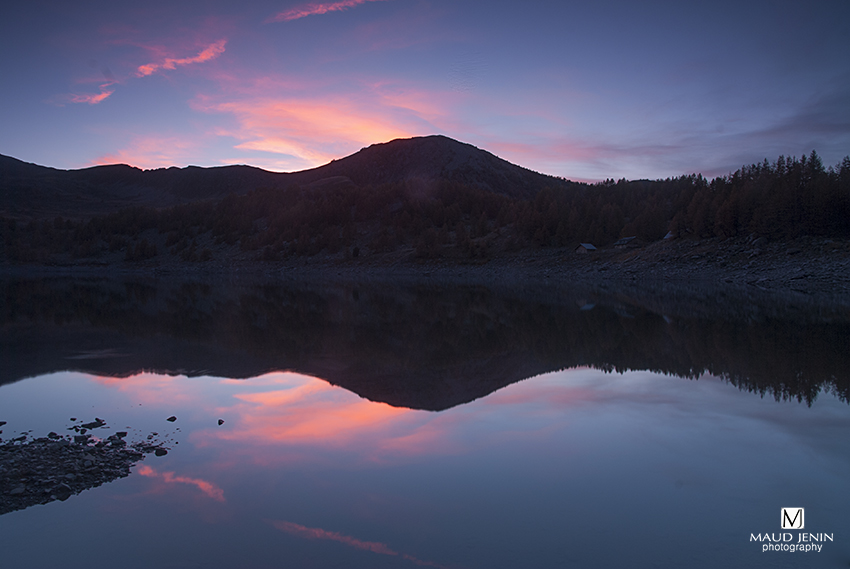 The night became the owner and it is in the front as we climb our tents. A pretty twilight draws behind the peaks. Meanwhile the dark night to take pictures of stars, Christian prepares its lyophilized flat while I 'm warm pasta prepared the day before.
Humidity is there but not cold, as better. This is even with the polar and gloves that I accompany Christian the lake to take pictures of stars.
My first pictures of stars are from new zealand . I've never done it since . I still a good time to test . We started to photograph the green tent illuminated Christian . Looks like a small UFO.

Given my limited experience in this field, and my little old camera , I'm pretty happy with my tests. After an hour I 'm tired , tired and starting to get cold at night I wish good Christian .

I know I can never sleep the first night in a tent . I woke up several times. The half moon light almost like a full moon. I decided to take pictures . Much care as I do not sleep. It's an incredible feeling to be there, in the dark night with the starry sky above my head . The nature, nocturnal animals and the great sky ... 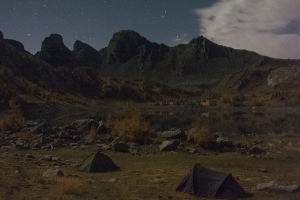 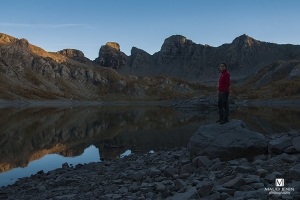 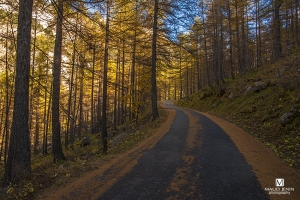 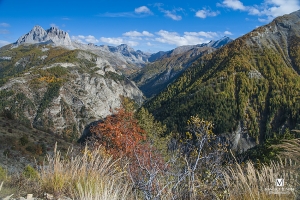 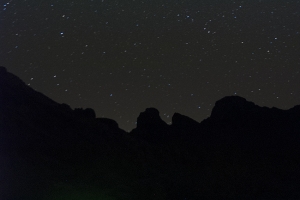 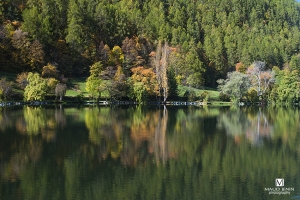 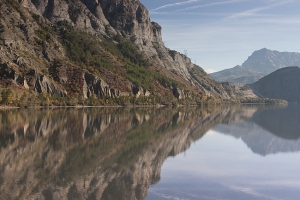 Following the adventure at Lake Allos